Bringing back the helmet for the Crown 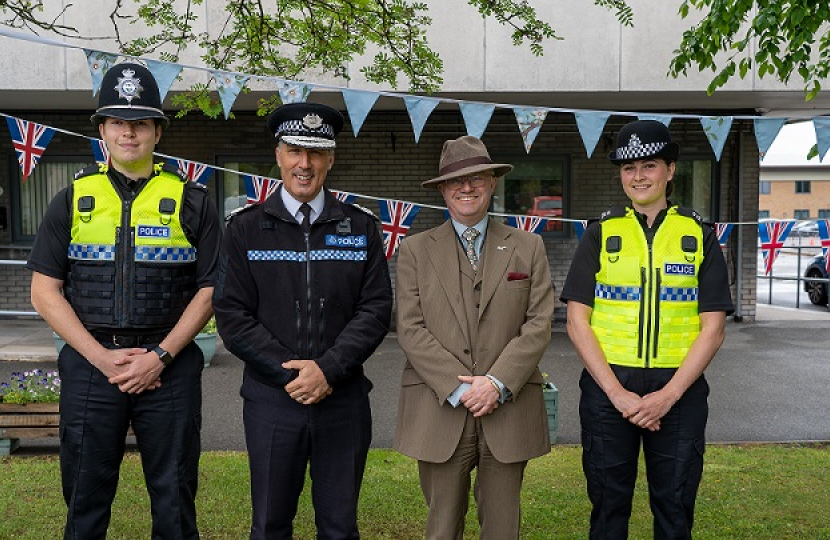 To mark Her Majesty the Queen’s Jubilee, I am delighted to announce that the iconic custodian police helmet and Bowler are returning to the heads of patrolling police officers in Leicester, Leicestershire and Rutland.

The distinctive domed helmet for male officers and bowler hat for female officers were removed several years ago in favour of the bump cap. In celebration of The Queen’s jubilee, and as a renewed commitment to standards and to officers being more visible in our communities, a new force-wide rollout of the recognisable headwear has begun.

"People know they can approach an officer for help. We have brought in the new rollout in The Queen’s jubilee year to strengthen that link between the public and the police and to celebrate the oath we swear to Her Majesty.

“Our officers are proud to wear the uniform and we know the public want to see us out on the beat keeping people safe.

“This visible reminder will help our officers stand out in an approachable and recognisable way so we can deliver an even better service.

“It is a clear sign of the importance of local policing and I am confident the people of our city and two counties will welcome the headgear being brought back.”

In addition to the new headgear, improvements are also being made to officers’ body armour. Rolling out from now, the improvements will make officers more comfortable and safe as well as keeping up uniform standards.

Temporary Chief Constable Rob Nixon continued: “Clearly we need the right safety equipment for our officers to do the challenging job we do. These improvements are good steps in the right direction. They will also reflect the professional standards of appearance the public would expect of us.

“I want the public to be able to clearly identify officers on the street and feel they are able to approach them in the way that the traditional bobby has been seen and valued for many years. In short, I want officers to look the part and act the part.”

The Custodian Helmet has been claimed to be based on the spiked Pickelhaube worn by the Prussian Army and was first adopted by the Metropolitan Police in London in 1863 to replace the ‘stovepipe’ top hat which was worn since 1829.

The equivalent for female officers is a bowler hat, which is also being re-introduced. This is shorter, chequered around the rim, and structurally reinforced to equal the custodian's protection.

Police and Crime Commissioner Rupert Matthews said: “I fully welcome the return of this piece of uniform in the Queen’s Jubilee year. Improving uniform standards is part of improving the service to the public.

"I equate this helmet to the police officer I used to know, whom I was able to spot in a crowd and know I could approach for assistance. This brings a sense of tradition back to Leicester, Leicestershire and Rutland but also will build confidence in policing throughout the city and two counties.”