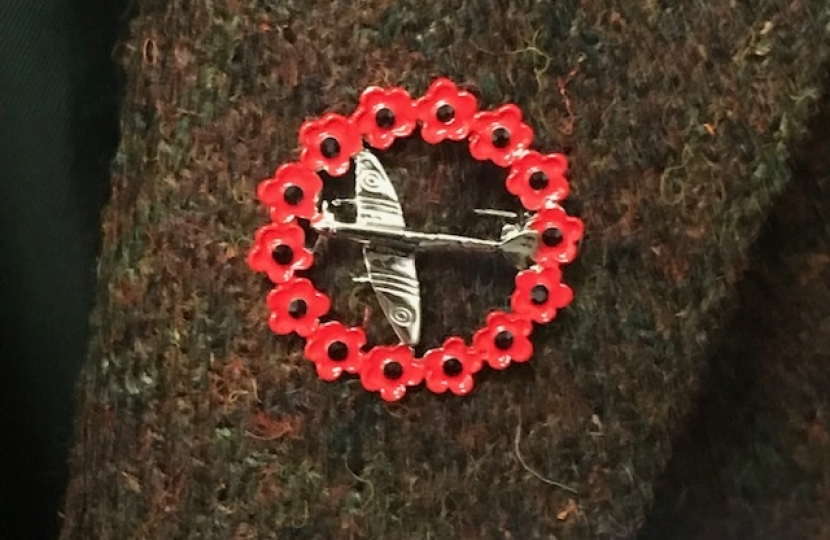 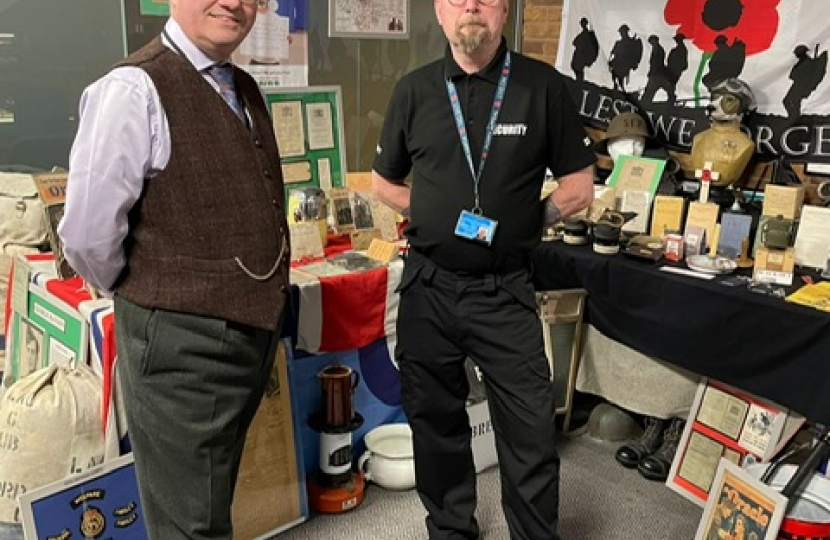 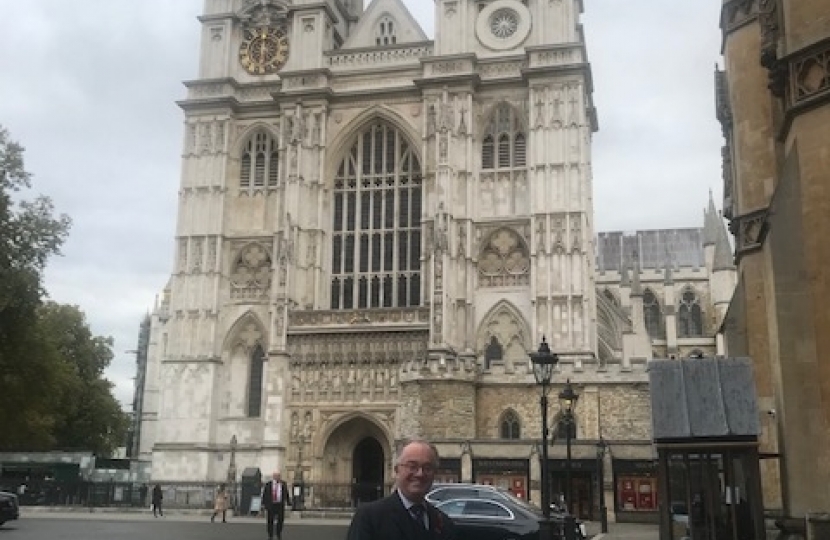 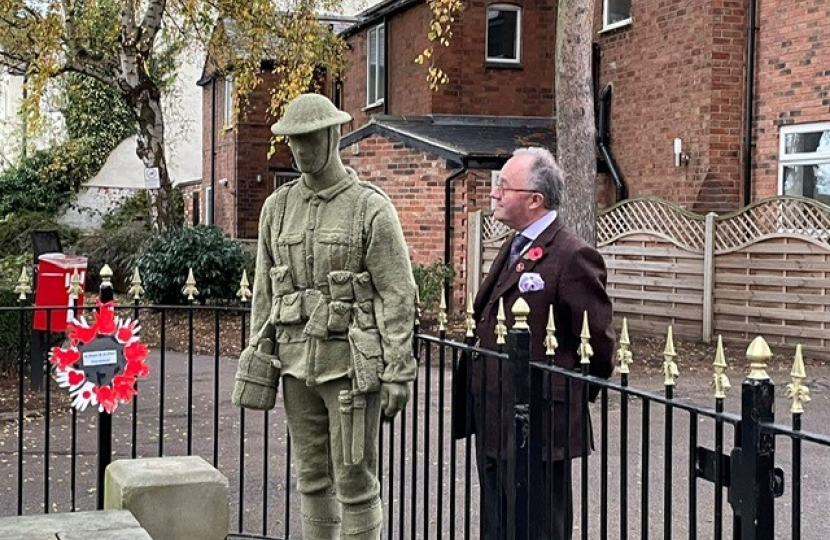 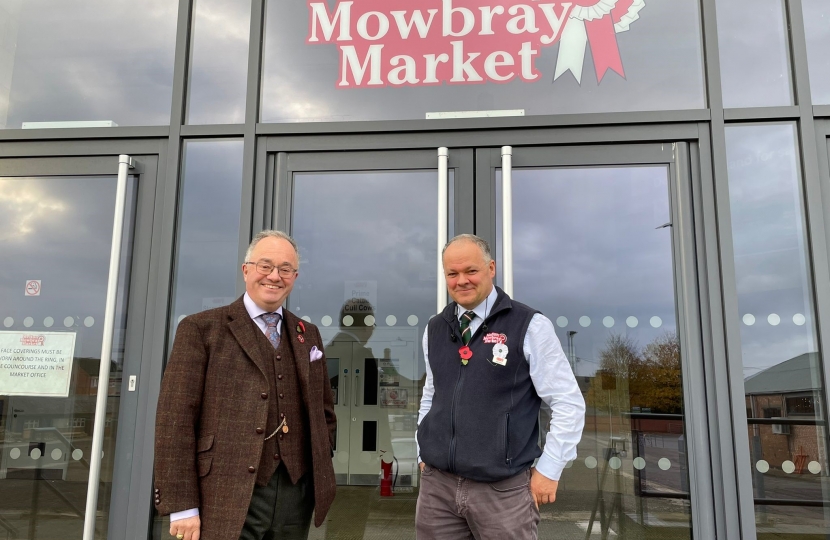 It is Remembrance Week. So instead of the usual assortment of badges that I put on my lapel, I dig out my mother’s old “Remembrance Brooch” – a silver Spitfire surrounded by a ring of enamelled red poppies – and put that on instead. It stays on all week.

After the regular Monday meeting with the Chief Officer Team, I return to my office to find representatives from one of the charities we fund to provide support for ex-offenders. The admirable Teresa has supplied them with tea and cake, so they don’t seem to mind me being late. They are clearly doing good work, but are subcontracted by another charity. I really must try to work out how all these organisations link in with each other.

Next up is Superintendent Adam Slonecki who comes along to explain to me about Volunteers in Policing. I am especially supportive of Specials and Cadets. I would also be supportive of Mini Police, but we don’t have any. Note to self – try to get some. We need to reach out to the younger generation to help build their trust in and respect for the police. It seems I am pushing at an open door with the Superintendent. Good!

A day in London.

My first stop is in the House of Commons to meet with Tim Loughton MP, Chairman of the Home Affairs Select Committee. I’m there to bend his ear about the problems the police are having over redaction of evidence before sending a file to the Crown Prosecution Service. I explain that Leicestershire Police on a monthly basis review hundreds of cases and spend thousands of hours redacting, for instance in  April 2021  1,419 hours were lost to redaction alone on pre-charge files.  Or for a year 17,430 hours, costing £443,000 annually. This is police officer costs alone and does not include the additional administrative cost to the Criminal Justice support team. Mr Laughton is shocked at these figures, as well as at the delays in getting cases to court.  He promises to “grill the minister”. I then spot on his bookshelf a copy of “Change or Go” [the key reference for Leave campaigners in the Brexit referendum]. We reminisce about the referendum campaign.

On my way to the Association of PCCs, I pass Kit Malthouse. I say hello, but don’t warn him about the grilling he is about to get. Will I regret this?

Next, I go to the Henry Jackson Society for a presentation of some research that they have done into the attitudes of various ethnic groups to the police. Fascinating stuff. I end the day at the London Fire Brigade HQ to catch up with an old school friend who is now a manager there. If PCCs take over governance of Fire Brigades I’m going to need all the advice I can get. As we wrap up our discussion she looks at her watch. It is 5:15pm. We go to the pub.

We start with our regular Wednesday OPCC Team Meeting. I make some routine announcements, then we go around the room so each person can explain what they are up to. Everyone seems in good spirits. Cracking!

I then go to join the Chief Constable as he signs the Armed Forces Covenant. I’m a big supporter of this, and of the Police Covenant. Society owes a huge debt to those who serve and it is only right that this debt is repaid. I’m glad to hear that Leicestershire Police are looking to back the Covenant to the hilt.

Next I go off to Eava FM to talk to them about a scheme they are organising that will involve troubled teenagers in music workshops and [hopefully] keep them off the streets so that they don’t create work for the police. I then have a chat on air with their presenter, giving me an opportunity to praise our officers who patrol the streets of Leicester.

Then it is up to Quorn to meet with Baroness Nicky Morgan over tea and scones to discuss the work she is doing in the House of Lords about economic crimes and domestic violence. She asks for my backing, which I am happy to give – they are jolly good scones, after all.

After dealing with some troublesome admin, I head off to the Memorial Garden for our Remembrance Ceremony. I arrive just in time for The Silence. I find the reading of the names strangely moving.

A Teams call follows with Amy Morgan, noted campaigner against knife crime. Among other things we discuss the visit of the Knife Angel to Leicester. I had already been looking at this as part of our People Zones project. Good to be supporting the same things.

Off to Melton Livestock Market to meet with their manager Hugh to discuss crime as it affects livestock farming. I arrive as his team are clearing out the buildings and yard after a full day of cattle auctions. I step carefully around some piles of rather smelly stuff. Hugh offers me tea as we chat and is very informative not only about rural crime, but also about our new Rural Policing Team led by Sergeant Archer. The team has made a good impression on the farmers. Good.

Obviously, I pop into the town to buy a pork pie before moving out. I also stop at a memorial to the crew of an RAF bomber which crashed near Melton in 1944, killing the crew. My dad served in Bomber Command at that time. Another moving event.

Back at Force HQ, I meet with Security Guard Mark Adams to discuss the magnificent display of wartime memorabilia that he has set up in reception. I point to the Air Raid Warden’s helmet and tell him we still have my Uncle George’s one – though ours is a bit more battered than his.

I have only one meeting today – to discuss the public consultation on the Police and Crime Plan. But I have 5 reports to read, which between them total 134 pages. I suppose I had better get started. Sigh!