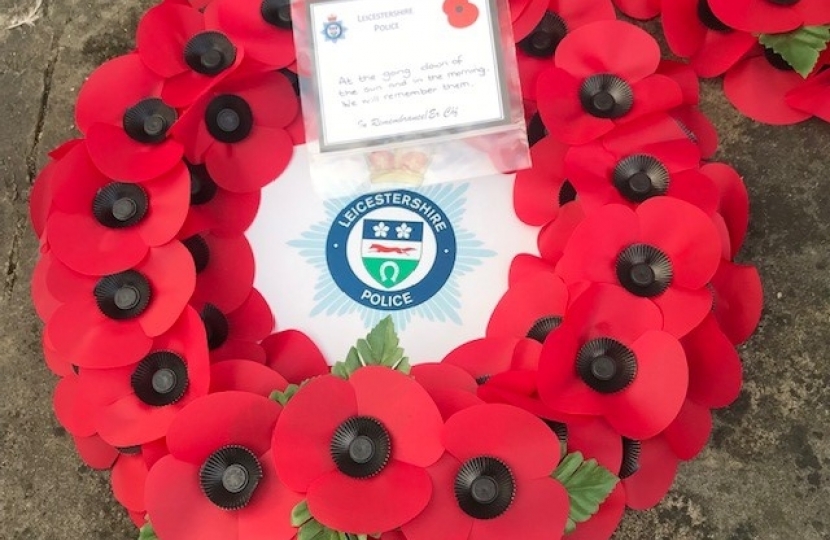 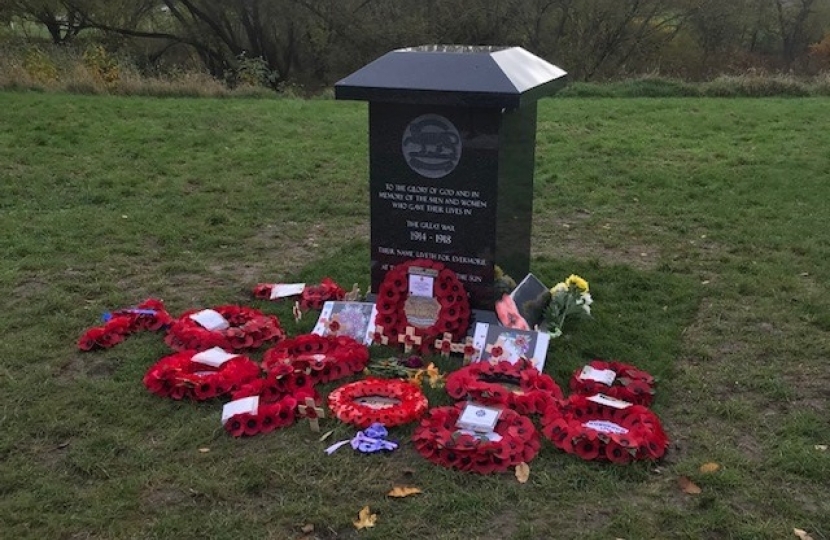 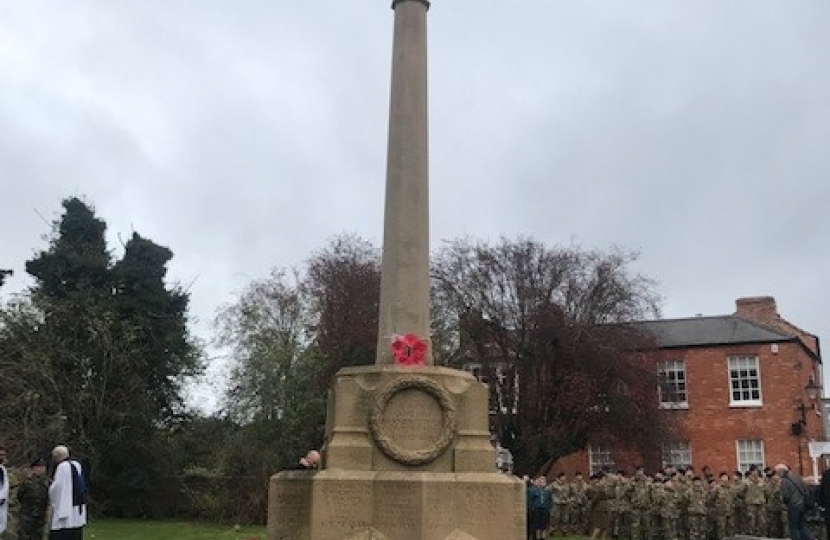 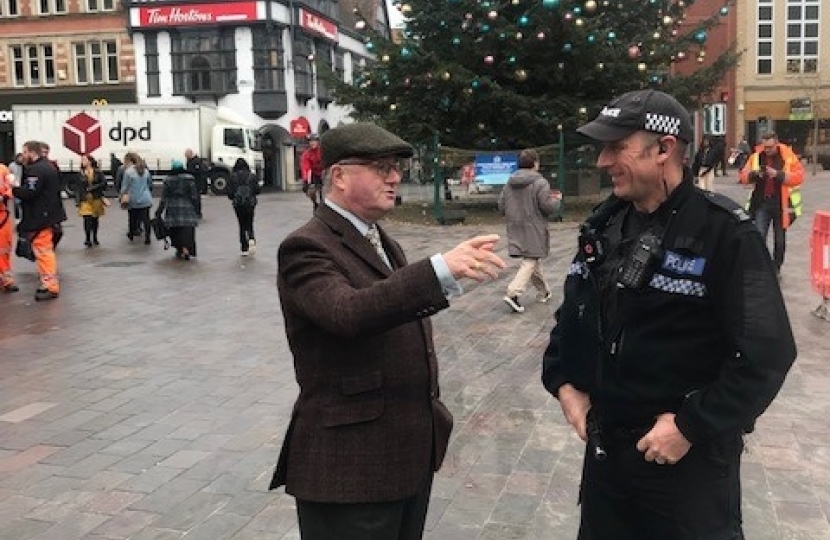 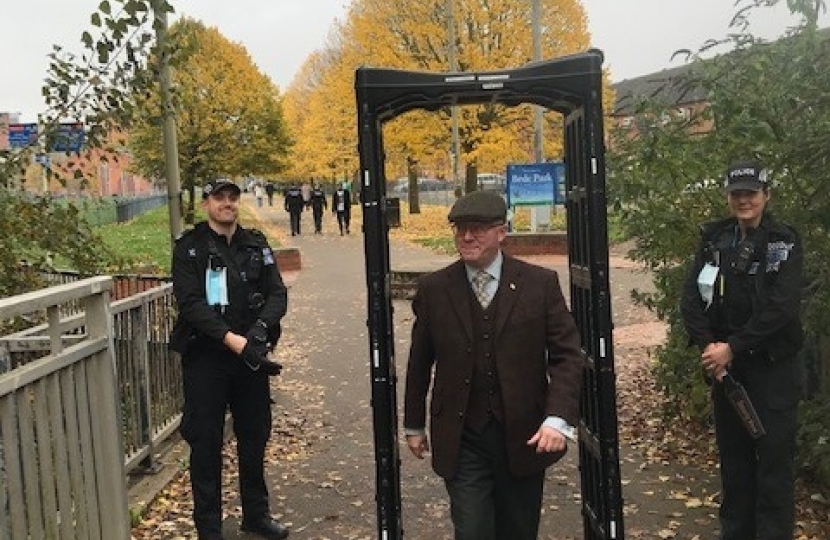 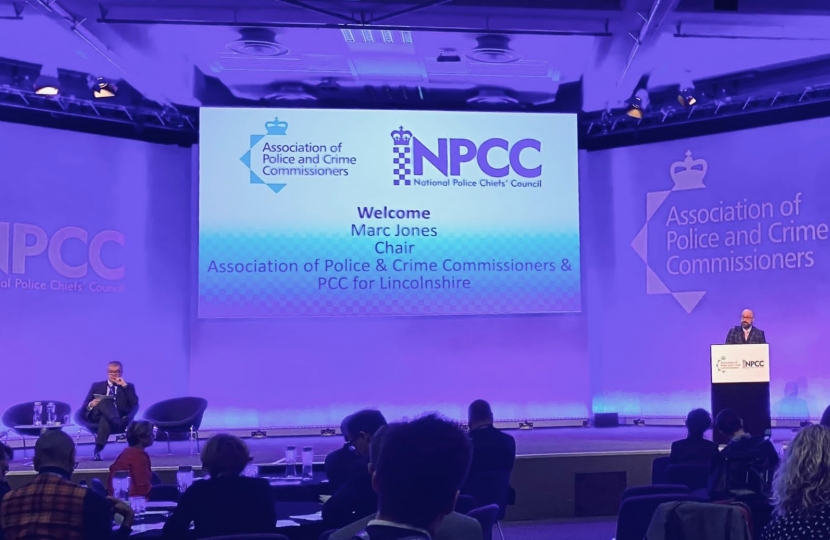 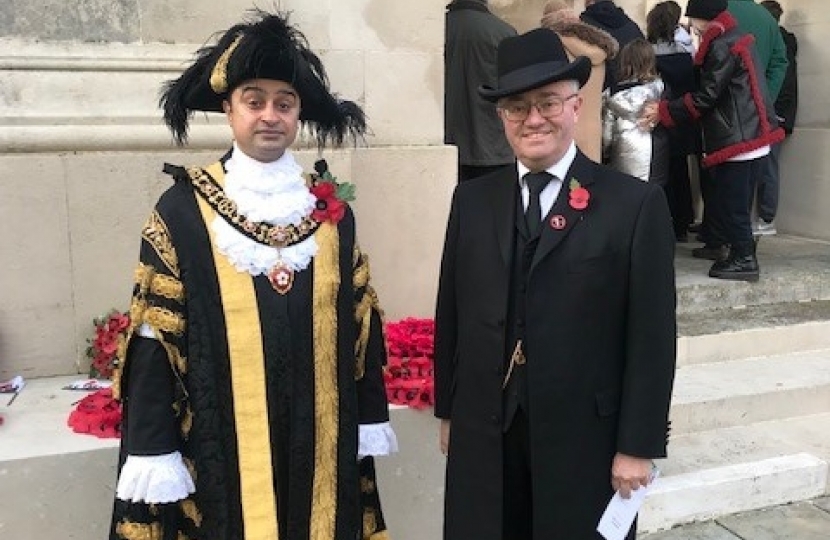 It is Remembrance Weekend. I head for Melton Mowbray at the invitation of Cllr Pam Posnett to join the Melton Veteran’s Breakfast Club at the Harboro Hotel. I called ahead to say that I am having dinner out that night, so could I have a small breakfast? I’m struggling with the waistcoat of my green winter suit (ahem). Pam meets me at the door and ushers me through to the bar area, which is packed with military veterans and their partners. The Chairman introduces me to the crowd, waves me to a seat and starts to regale me with tales of when he was with the Paras.

Breakfast is put down in front of me – 2 sausages, 2 bacon, 2 eggs, mushrooms, tomato, fried bread, hash brown and toast. “Excuse me,” I accost the waitress. “I asked for the small breakfast.” Before she can answer the chairman bursts out laughing. “That’s as small as breakfast gets round here,” he grins. Goodbye waistcoat.

To the Memorial Arch in Leicester. I’ve not been before as I usually attend my local village commemoration. Fortunately I bump into a couple of police officers in the designated car park. “Follow me,” says one. We weave our way around the temporary barriers and head towards the Arch. “There’s the Chief Constable”, says my guide pointing through the crowd. I thank him and bustle off. I don’t get far before I meet the Lord Mayor, he stops for a quick chat. Then it is Cllr Heman Bhatia, then Cllr Ruma Ali. By the time I get to the front the Chief Constable has vanished. Never mind, I find a seat with my name on it and sit down. The service that follows is very moving, but rather short. Our Chief Constable marches smartly to the front to lay the wreath, salute and march back to his seat. I meet out detachment of officers and cadets afterwards outside De Montfort Hall. I must be getting old – both contingents look about the same age.

I drive over to Thurnby Lodge where a new war memorial has been installed in the local park. I walk over to pay my respects and meet with Cllr Aldred, who was instrumental in getting the memorial installed. We swap stories about our families’ record in the services.

Then on to Oakham to play a more formal part in the Rutland Remembrance Sunday ceremony. I lay a wreath alongside Assistant Chief Constable Julia Debenham. Here we go the whole hog with a full church service, parade and all. I find it all very touching and say a silent prayer for the soul of Great Uncle Edward, killed at Ypres in 1916.

At 1pm I join the Regional Moderns Slavery and Human Trafficking Strategic Governance Group. It is held on Teams, so I decide to switch my camera off and eat my lunch.

“Item 4,” announces the chap chairing the meeting, “county updates. Mr Matthews, what have you got to report from Leicestershire?”

Urk! Nobody told me I was meant to be doing a report. I apologise and promise to do better next time. There are some frosty stares from the other participants.

The afternoon is filled with meeting councillors from Oady before a 4pm with Mr Nixon who talks me through the important strategy meeting we will be having on Wednesday morning. It is going to last for 3 hours, apparently. I decide that perhaps I should review my contribution.

To Mansfield House police station for an early (for me) start.  I arrive as Sergeant Wells is briefing his team on the day ahead. “Keep an eye open for this man,” he says pointing at the screen. “He has promised to kill a police officer.” Charming!

Briefing over I head out on foot patrol with PC Turner, with Sergeant Wells in tow. We spend two hours pacing around the streets of the city centre. PC Turner talks to a number of rough sleepers, stops a chap who is speeding along the pavement on a motorised scooter and helps a man with an American accent find Granby Street.

Sergeant Wells peers at his watch. “Time for a bacon cob”, he announces. I don’t take much persuasion.

Then it is off to Bede Park with PC Spencer to find the team out with the knife arch. Everyone is very polite, and nobody refuses to go through the arch.

I then drive over to Warwickshire to meet with their PCC, Philip Seccombe, who wants to show off his Rural Crime Team. Jolly impressive it is too. I spend an hour making notes, peering at vehicles and chatting to officers.

Then it is off to Coalville to attend the Full Council meeting of the North West Leicestershire Council. I make a short speech about how wonder the Leicestershire Police are, then it is time for questions. The councillors are mostly interested in policing in their own wards, which is fair enough, but there are also some questions about knife crime, violence against women and girls, drugs and such like. After 25 minutes the chain-bedecked Chairman of the Council calls time. I slip off home for supper while the councillors move on to substantive business.

The day starts with the meeting with the Chief Officer Team that Mr Nixon had promised would last three hours. Actually it is over in a mere 2 hours 50 minutes. We spend the time discussing the budget, strategy and other big ticket items. It is all terribly hush hush and secret. So no doubt you have heard all about it by now.

The Road Safety Partnership has its virtual reality van outside. I go for a realistically terrifying ride in a car with some teenagers who are swapping photos on their mobiles. The drive ends in a collision with a tractor. Blood, bodies and ambulances follow. I’m glad to get out. “Would you like to try the motorbike crash next?” asks the operator. I decline.

Over to Coalville to meet Inspector Richard Muldoon and his team. I learn all about the issues affecting North West Leicestershire, fascinating stuff.

Then back to Leicester Railway Station to catch the evening train for London and a 2 day conference with the National Police Chief’s Council.