Commissioner’s Blog no.8 Tractor Run – A Frozen Penguin – I am polite – Christmas Jumper 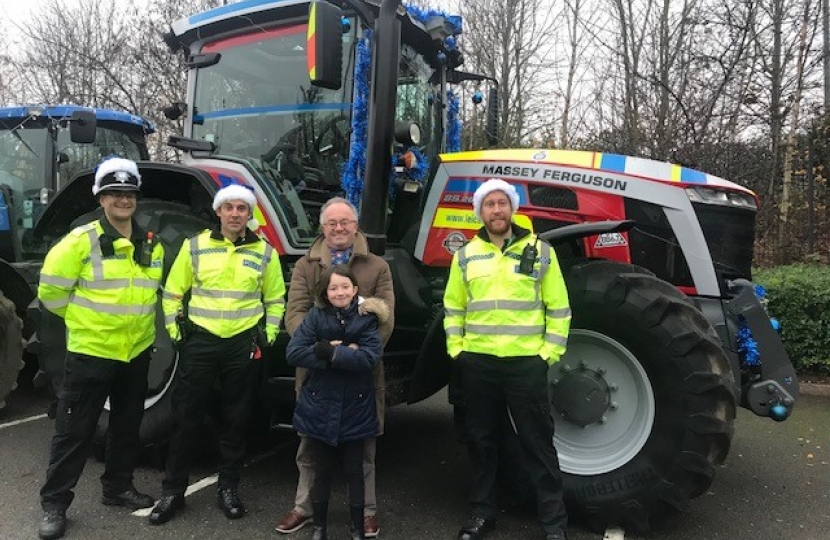 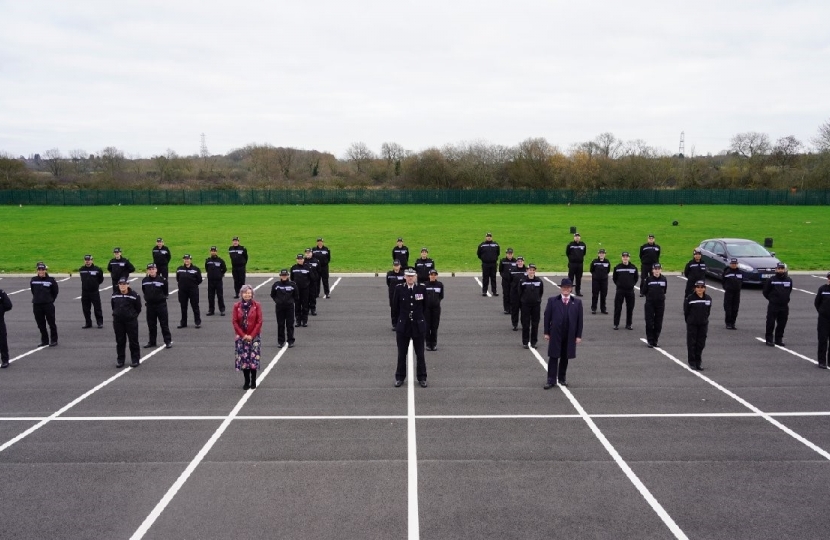 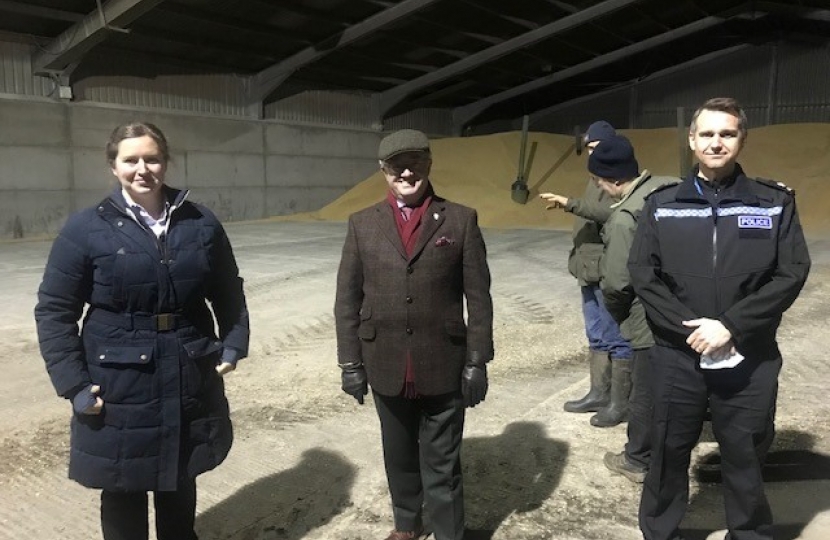 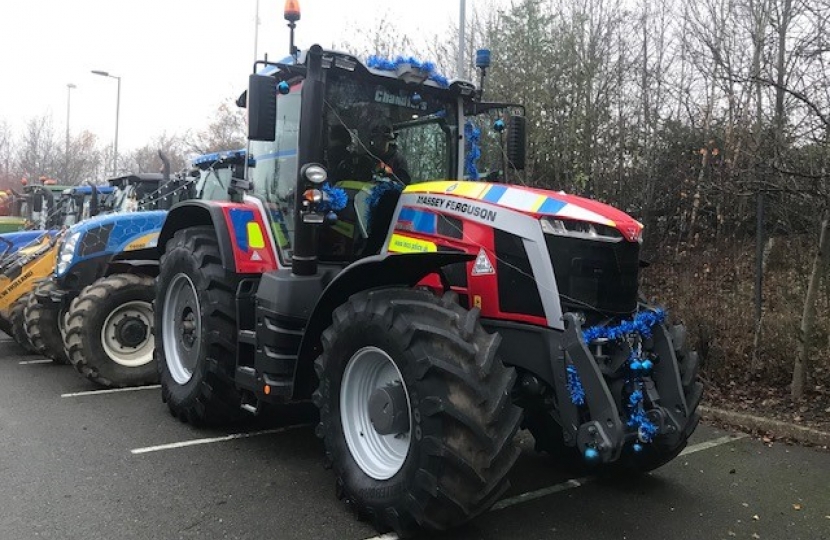 To Lutterworth for the Festive Tractor run in aid of local charities, our very own Rural Crime Team tractor is taking part. I’ve promised to go along and wave them on their way. I’m glad that I decided to put on a warm coat, it really is a bit nippy. I arrive in good time and chat to the man on the gate. I explain who I am.

“The Police Tractor?” he says. “I’ve heard good things about that thing! But they aren’t here yet.” He gives me a grin. “Typical police, always late for everything” I retort playfully as he points me to the burger van and promises to send the team over when they arrive. As I munch away I watch the tractors arriving. There are – quite literally – hundreds of them. All are decorated with tinsel, trees and Santas. One has a trailer with a real-life Santa and a pair of elves on it. Another has wooden additions attached to make it sleigh shaped.

Eventually Sergeant Archer arrives with the tractor. He takes me around to do a bit of networking. Then a hooter goes, and it is time for the off. I stand by the roadside to wave everybody off into the gathering dusk. Grand stuff.

I start by meeting with Stephen Day, our Designing Out Crime Officer. He explains his job – fascinating stuff by the way – then I ask him about our People Zones. He nods his head. “Makes you wonder what architects were doing back in the 1970s,” he says. “It’s almost like they were designing in crime.” He promises to work with Jess in my office on finding ways to improve the built environment in those areas.

Next is the Chief Officer Team, after which Sergeant Whittle talks me through the police relationship with the Traveller community and Roy Mollet explains our interface with HMIC.

Lizzie, acting CEO, calls. She has covid. And three other members of staff are isolating as family members have tested positive. We decide to advise all staff to stay at home unless they absolutely need to be in the office. Lizzie sends out the email. I open the office windows to get fresh air for those of us in the office. These are  challenging times but we must keep our staff safe.

After some paperwork Oliver the Researcher and I head off for a farm near Market Bosworth. There has been an outbreak of hare coursing, causing massive damage to crops, gates, fences and other farm property. The farmers, whose livelihoods can be decimated are angry and want to know what the police are doing about it. Superintendent Starbuck comes along, but sadly he did not get the memo about the meeting taking place in the open air. The rest of us are all wrapped up nice and warm. Poor Mr Starbuck is doing a very good impression of a frozen penguin. Mind you, he answers every question with tact and clarity before putting in place a special operation to deal with the issue. More good stuff.

After my weekly private meeting with the Chief Constable, I take a quick trip out of the office to get my hair cut. I’m nervous about what Boris might do next. When will I be able to get my barnet trimmed again?

Back in the office, I meet on Teams with a couple of members of the East Midlands Criminal Justice Board. They want something put on the agenda for tomorrow’s meeting. I say it can go to the next meeting as the members will need time to read the report and decide what to do. I am not popular.

Nupur, who handles complaints and case work, sticks her head around the door. “I’m afraid we’ve had a complaint about you,” she tells me. What is it? “A lady has objected to you taking part in the tractor run. She says all the diesel being used is bad for climate change.” I dictate a reply for Nupur to send. Then I change my mind and ask her to politely respond.  Think this should come out, in case it gets leaked.. I know we all have social responsibility and I do my bit, it gently reminds me that cops and staff get these sorts of comments all the time. Your patience is admirable!  Grrrrr

Then I head to the Lecture Theatre for the Attestation of the next batch of detectives to be recruited. They are an impressive bunch. Outside to the car park for a photo. I’m in my smart suit, not the warm tweeds like yesterday. By gum, it is a bit nippy.

I’m glad to get back into the warm. Teresa, my PA, presents me with a hot cup of tea and a mince pie. Gold Star for Teresa who is a very generous and kind person!

My last day in the office until January. I wear a Christmas jumper. Nobody notices. I don’t know why I bother.

I check my emails. Typical, everyone is trying to get stuff off their desks before they leave work for Christmas. A pile of stuff hits my desk. How can I get rid of it?

Oliver finally notices my jumper. He likes it. So does Teresa. They are the only ones here.

On to Teams for a long meeting about the Budget. We make lots of decisions in a short space of time. It is all very hush hush, so I won’t tell you about it until next year.

After lunch it is time for the East Midlands Criminal Justice Board meeting. The agenda and reports run to over a hundred pages. Memo to self – don’t arrange such a serious and lengthy meeting for Christmas week next year. The meeting wraps up at 5pm.

Oliver sticks his head around my office door. “Fancy a beer down the pub?” he asks.