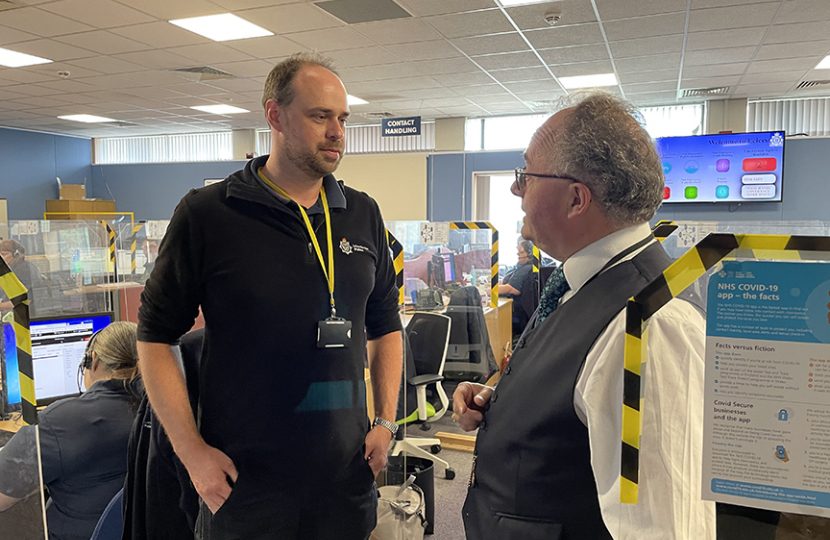 Leicester, Leicestershire and Rutland Police and Crime Commissioner Rupert Matthews has welcomed the findings of a new report scrutinising how well the force responds to the public.

Improving Leicestershire Police's communication and accessibility to the public is a key theme in the PCC's Police and Crime Plan and Mr Matthews said he was reassured efforts were being made to deliver on his strategic goals.

In the latest police efficiency, effectiveness and legitimacy (PEEL) inspection, Her Majesty's Inspectorate of Constabulary and Fire & Rescue Service (HMICFRS) said Leicestershire Police is increasing the range of channels through which crime can be reported.

The report said the force was an early adopter of Single Online Home - the new national contact platform for police forces that helps the public to report low-harm crimes - and had become a trial user of the system for reports of more serious crimes involving vulnerable victims such as domestic abuse, rape, sexual assault and missing persons.

As a result, the report said the public now had more opportunities to report serious crime across the city and two counties and this increased the likelihood they could, be safeguarded.

In other areas, it said the force understands the demand faced by officers responding to calls and deployed staff effectively. This meant it responded in a "timely and appropriately way" on most occasions, it added.

In delivering an overall grading of adequate in its response to the public, HMICFRS outlined areas of improvement. It said the force did not always identify repeat or vulnerable callers and needed to ensure that repeat or vulnerable callers were routinely identified. It also said call takers did not always give appropriate advice on the preservation of evidence and crime prevention.

Responding to the report, Mr Matthews said: "Although this assessment highlights the need for further work on how Leicestershire Police responds to the public, it does, nevertheless, show strong commitment from the leadership team to make these improvements and to continue building on our performance, which is outstanding in other areas.

"I am pleased HMICFRS noted the improvements to the way the public can report crime, particularly more victim-centred crimes such domestic abuse, and that when the public call for help, they are attended to swiftly and appropriately. This is an important measure of the force's effectiveness and a key driver of public confidence.

"As Police and Crime Commissioner, I am proud of the overall picture this report presents and will be maintaining a watchful eye over any areas identified for improvement to ensure the force continues to deliver a top-quality service to the public."

A copy of the report can be found here:  https://www.justiceinspectorates.gov.uk/hmicfrs/publications/peel-assessment-2021-22-leicestershire/