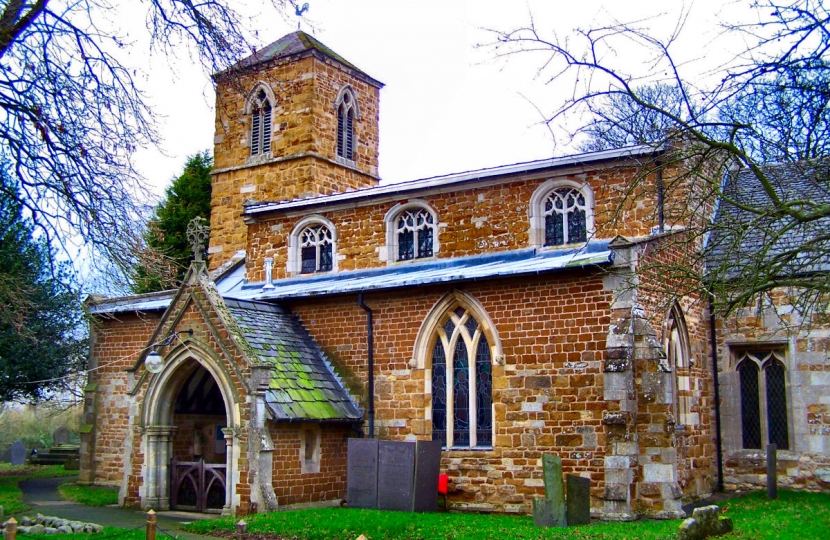 More must be done to save our rural church roofs. As I write, four men are awaiting sentence for the despicable crime of stealing lead from church roofs. Anyone living in a village that has suffered this crime will know of the appalling damage it can do to the community – including those who rarely cross the threshold of Christ’s building.

The four men all live in the West Midlands, but their crimes have extended across Leicestershire, Lincolnshire, Humberside and Somerset. Lincolnshire Police committed a dedicated team of investigators into thefts over the past two years looking into more than 40 offences. With the gang pleading guilty to 30 such offences, they are looking at significant prison spells and the Lincolnshire force is to be commended for their efforts. My local force, Leicestershire and Rutland Police, is to be similarly commended for their co-operation and their own individual investigations.

As welcome as these latest arrests are, they highlight just how systemic this issue is. This is not a crime that will vanish anytime soon.

I was recently talking to the man tasked with helping church officials in the Diocese of Leicester protect their buildings. He told me attacks on metal roofs had more than doubled between 2015 and 2019, rising from 7 cases to 15. He presented a second statistic that during the past decade, a third of the 304 churches in the diocese had been attacked by metal thieves – with 34 being attacked more than once. This data is incredibly worrying. Not only can we see lead theft cases increasing but we also see lead thieves are often returning to the same parishes. Repeat attacks are motivated by thieves knowing if they came back a few months after their first assault, the roof will be covered with nice new lead sheets for them to steal all over again.

These criminals will stoop further than only stealing lead. St Edith’s in Orton on the Hill replaced its lead roof only to suffer a repeat attack when the thieves made off with the flashings and gutters. This would have netted the thieves relatively little in cash terms, but it caused major damage to roofing timbers when the water got in.

Judge Michael Heath perfectly summed up the attitude of lead thieves when passing sentence against a small group of them in 2012 stating the:

professional, planned offending for financial gain imposes a heavy burden on small communities. The thefts have caused serious financial consequences and the impact on these communities must not be underestimated. It is also about the desecration of sacred places of divine worship. You lot couldn’t care less about those feelings. All you cared about was making money.

The remarks of Judge Heath are welcome. All too often church roof thefts gain little attention from the national media who are inevitably based in large cities and reflect the concerns of the conurbations.

Judge Heath’s comment on the financial burden placed on smaller communities is also of note. For example, the repairs to St James the Great in Ab Kettleby amounted to £21,000 and those to St Mary the Virgin in Thorpe Arnold cost £41,000. The increase in the number of thefts, and the financial impact that they have, has also had a knock-on impact on insurance. The Ecclesiastical Insurance [EIG] now impose a limit on how much they will pay out unless an approved roof alarm is installed. Other insurance companies, such as Trinitas, have less restrictive conditions but conditions, nonetheless.

Roof alarms are not cheap. A typical medieval church will require an up-front cost of £5,000 to install the alarm, and then around £700 per year in monitoring and maintenance. There are charities and trusts which can help with these costs, and my local diocese will offer £500 towards installation, but this is still a daunting cost for any parish.

Whilst the financial burdens on small rural communities are worrying, the emotional impact of lead theft on local communities is arguably even more troubling.

The impact of these offences goes well beyond the significant financial cost. Communities have felt a great sense of loss at the damage caused to their heritage, and increased vulnerability due to the rural nature of many of the premises.

Chief Inspector Vickers is quite right to highlight that the impact of these offences goes well beyond the direct financial cost.

I was in Great Dalby a few weeks ago where the lead from the church roof had been stolen twice in the past three years. It was only after heavy rain that the lead was noticed to be missing the second time around. Carpets were sodden, pews were wet, stone floors were soaked, and brick floors had collapsed.  Nevertheless, a rescue team of villagers was summoned, and they made the building good enough for a double christening to go ahead the next day.  It was only a minor consolation that the church wardens were able to salvage some old lead from the porch with initials, dates and footprints from the 1700’s. Here we see the local community bearing the burden of clearing up after these criminals who evidently show little to no regard of their impact. In this instance, like many others, these villagers should be praised for their resilience and compassion.

So, how are the police tackling this issue? Lincolnshire Police have been impressively active in catching the thieves and obtaining convictions leading to lengthy prison terms. But I don’t think this is enough.

When Sir Robert Peel founded the modern police nearly two centuries ago he set out nine Principles of Policing. One was “To recognise always that the test of police efficiency is the absence of crime and disorder, and not the visible evidence of police action in dealing with them.”

Peel’s principles remain as valid today as they were two centuries ago. Preventative measures against thieves are more effective than punishing thieves after the crime. It is essential the police continue to work with rural communities to prevent offending and encourage people to report suspicious behaviour at Heritage Sites to the police immediately, day and night.

Rural Crime Teams need to be expanded to provide effective cover across our rural areas and Heritage Crime Officers need to be trained to work on investigations. They should also be tasked with providing site-specific advice to parish councils, church wardens and others responsible for the care of valuable, but vulnerable buildings and other structures. There is also a case to be made for police forces to make a financial contribution to crime prevention measures, such as roof alarms. Very often these buildings are essential to the atmosphere of our villages and key to village life and community. They must be protected.

If we are to pass our Christian heritage on to our children and grandchildren we must be proactive about defending it.

Rupert Matthews is the Conservative Party’s candidate to be Police and Crime Commissioner for Leicestershire and Rutland.

Photo shows Thorpe Arnold’s Church of St Mary the Virgin in Leicestershire where repairs after the roof was stolen cost over £41,000. By Kev747 at the English Wikipedia, CC BY-SA 3.0, https://commons.wikimedia.org/w/index.php?curid=8636035

On a visit to Queniborough, I met with Cllr James Poland and Cllr Dan Grimley. They took me to Main Street, just by the Briannia pub, to talk to me about speeding traffic and other road safety problems.