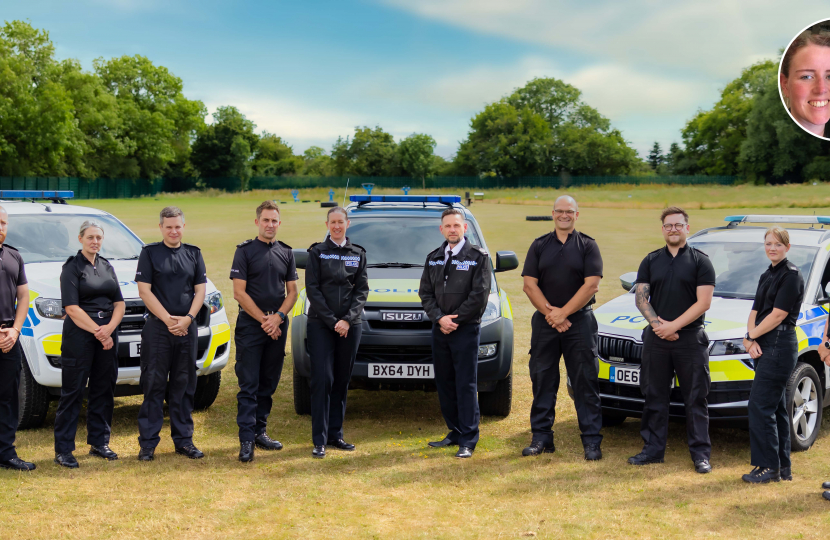 I am delighted to announce that the team dedicated to rural policing is expanding from three to eight officers to provide extra resources to target, disrupt and address rural crime.

All eight officers have a background in farming and a determination to tackle those issues which affect our rural and farming communities - including machinery theft, rural, wildlife and heritage crime. They are supported by the force’s 18 wildlife officers, heritage watch volunteers and those neighbourhood officers on rural beats.

I highlighted the need to improve our response to crime in rural areas in my manifesto, and the initial team of three, comprising Sergeant Paul Archer, PC Rob Cross and PC Chris Vickers, was launched as part of a renewed Rural Crime Strategy at the end of 2021. I have now fleshed out my manifesto commitment in my Police and Crime Plan, giving the police force a clear strategic guide as it continues to show its commitment to tackling rural crime by expanding the team further.

The five new officers are;

Each Neighbourhood Policing Area (NPA) also has a new 4x4 Ford Ranger vehicle to help officers patrol off-road and in other rural areas.

“The initial team of three has made a big impact in the last year in terms of recovering hundreds of thousands of pounds of stolen machinery; making significant arrests; cross border working and encouraging reporting, and I am delighted that we are able to expand the team further and invest in additional resources. We know the high impact rural crime can have on those who live and work in the countryside so this expanded team will be dedicated to tackling those issues and are supported further by neighbourhood officers on rural beats and the force’s wildlife officers.”

“Having worked very closely with Leicestershire Police, the Police and Crime Commissioner and National Farmers' Union farmer members over the last two years, I am delighted with the announcement that within a year of its inception the original three-man rural crime team, who have already made a significant difference, is getting an additional five officers to ensure specialist cover across the rural beat. I anticipate this progress being built on further in the near future.’’

“Rural crime is not a side issue – it has a devastating and lasting impact on its victims – with offences often linked to organised criminal gangs. This commitment from Leicestershire Police demonstrates clearly how seriously they take rural crime and it gives criminals a stark warning – there is now a policing team entirely dedicated to stopping them from committing offences and catching them if they do.”

Police and Crime Commissioner Rupert Matthews declared tackling Rural and Heritage Crime a key priority in his Police and Crime Plan stating: “I will ask the Chief Constable to dedicate Rural Crime Teams to the rural areas of Leicestershire and Rutland”.

“I have always been clear that our rural areas in Leicestershire and Rutland require robust policing. Crimes such as hare-coursing, burglary, dangerous driving, fly tipping, farm robberies and church lead thefts blight our villages and farms. I promised from the outset to provide resources to tackle the crimes that affect our countryside.

“Today is a time for celebration.  We are evidently delivering on my promise and I assure you this is just the start.”

Look out on the force’s rural policing social media channels for more information about each of the five new team members.

2 - PCC Rupert Matthews at the Archer Tractor Run with the original three rural police officers and the Police Tractor [sadly only temporarily borrowed for the run].