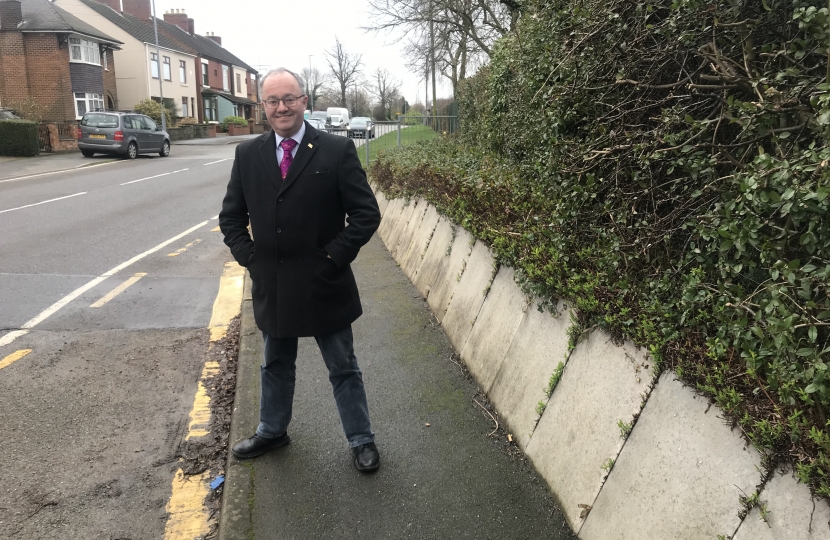 On Friday I went to Heather with Cllr John Clarke. John wanted to talk to me about speeding traffic in the village and the road safety problems that it causes.

We started in Swepstone Road, where the road enters the village. John parked in a layby marked ‘Bus stop’ in yellow paint. “Don’t worry,” he said. “There haven’t been busses here for years.” He turned back to face towards Swepstone. “The cars come along here at quite a speed. When they hit the 30mph signs, most slow down but a few don’t. One car was clocked here at 56mph. And it was a young mum with her four children in the back.” John shook his head. “Unbelievable.” I agreed that it was shocking. Then we climbed back in the car and drove through the village, heading towards Ibstock.

As we left the village, the road dipped down sharply before climbing up towards Ibstock. We pulled over into a driveway. “This is Pisca Lane,” explained John. “Now watch.” I watched. Cars were zipping past at a real rate of knots. I estimated one was doing 50mph, another faster. “The speed limit is 40mph,” said John, “but look at them.” We caught one chap doing over 80 once. And it was at school leaving time.”

I asked if why nothing was being done. “Because nobody has been killed or badly injured here,” replied John. “The police will come now and then to do a speed trap on the Leicester Road because there was a nasty accident there a little while ago. But they don’t come here.”

Now road safety and speeding are difficult issues because responsibility is divided between different organisations. Highways England designs and maintains major roads, the county council deals with minor roads, speed cameras are owned by different bodies depending on where they are and what sort of road they monitor, while dangerous driving is one for the police. But just because responsibility is divided does not mean that there is any excuse for not doing anything.

The Leicestershire and Rutland Road Safety Partnership brings together various agencies, including the two county councils, Highways England and the police, fire and ambulance services. That organisation is currently coming to the end of an eight year programme which aims to reduce road casualties by 30% by the end of 2020. That should give an opportunity to assess how successful the Partnership has been, which tactics have worked and which have not. Community Speedwatch schemes have been successful in some areas.

If I am elected to be Police and Crime Commissioner I will take the opportunity of the end of the Partnership programme in 2020 to undertake a thorough review of road safety and speeding enforcement to decide on an effective and efficient way forward.