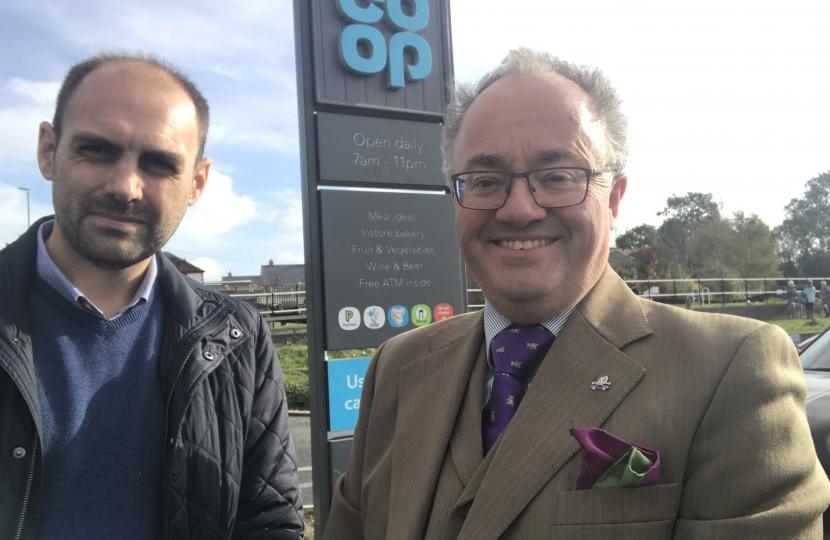 On Friday I went to Moira so that Cllr Andrew Woodman could show me the Co-op store where there had recently been an armed robbery. All was peaceful when we arrived, but Andrew soon filled me in. The robbery took place late at night on the 5 September when three men walked in armed with a shotgun. The staff were forced to empty the till and hand over the cash. Fortunately nobody was injured, but everyone was left deeply shaken. A few days later a man was arrested, and the police investigation continues. It is to be hoped that those responsible for this dreadful crime are convicted and punished.

That led us into a general discussion about how the police respond to serious crimes such as this. One of the comments that I have heard around out two counties is that the police can be slow to react in the more rural areas. Andrew thought that this had been a particular issue around Moira and Measham as they are right on the edge of the county – you can’t go much further without entering Derbyshire. But things are changing. The rapid response team that has until now been in Loughborough is being moved to Coalville.

“That is a great improvement,” Andrew told me. “With around 50 officers in Coalville we are going to be getting a much better service. It has taken our Member of Parliament, Andrew Bridgen, years of work to get this move made.”

I agreed. The speed with which police react to serious crimes like this can make all the difference. I want to see rapid response times right across our City and two counties.