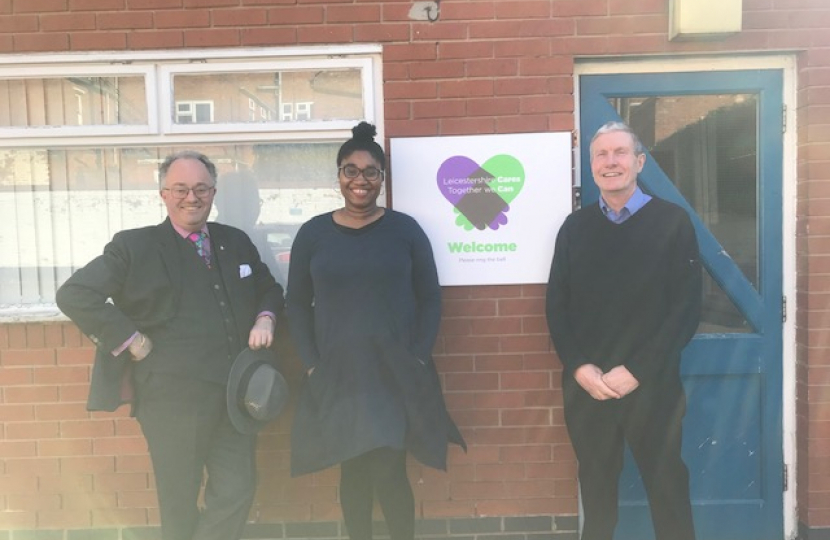 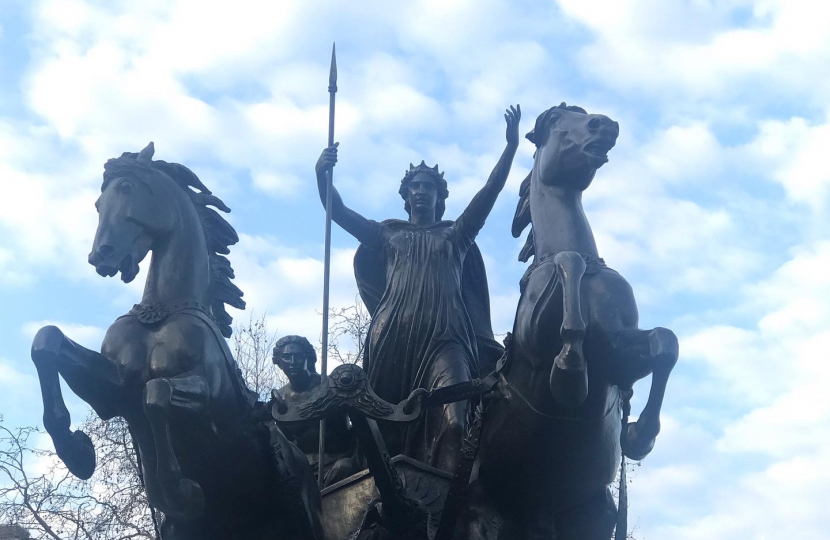 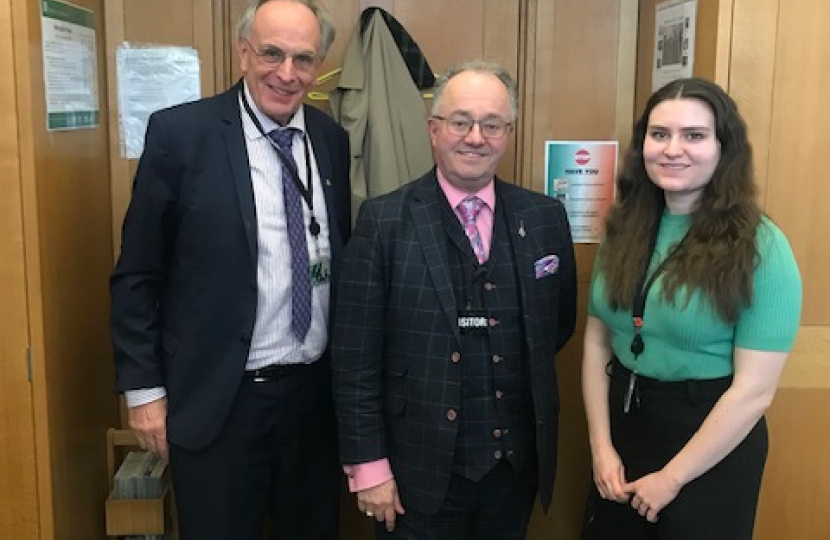 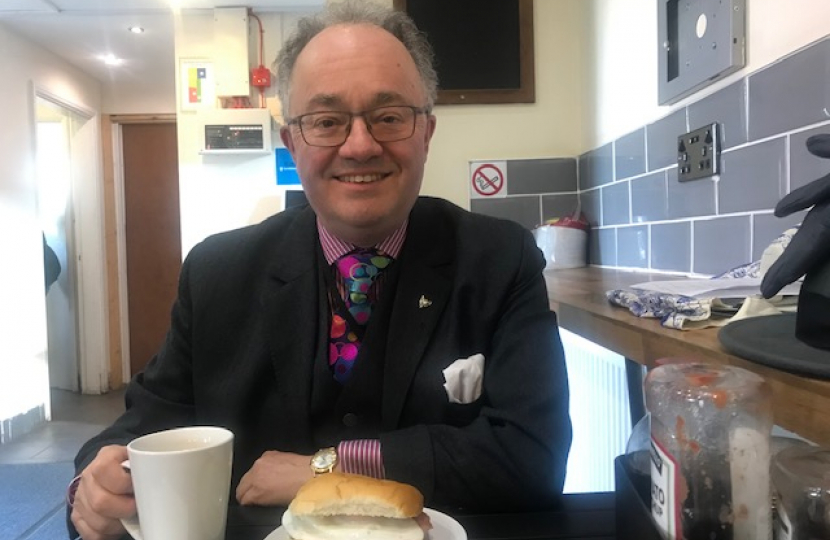 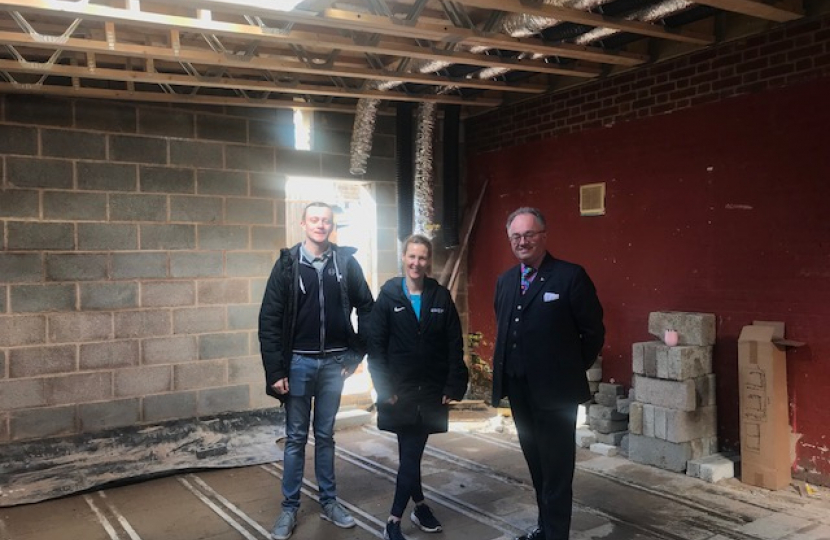 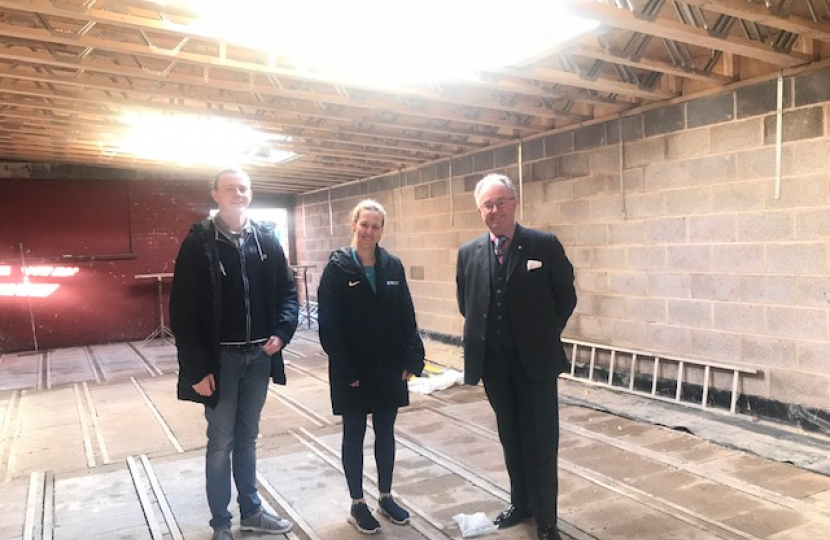 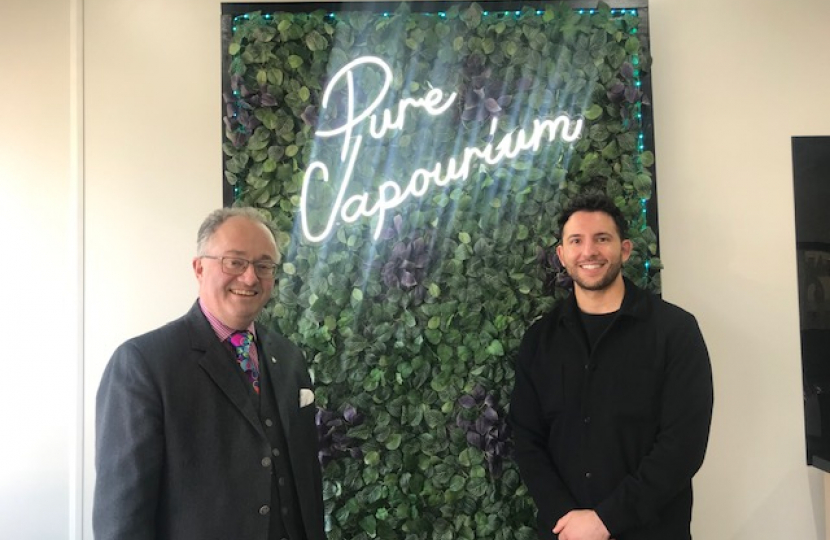 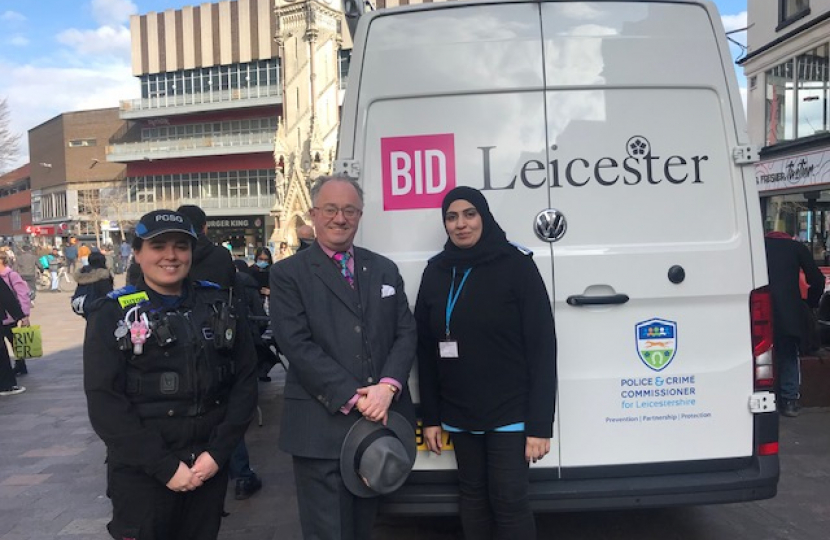 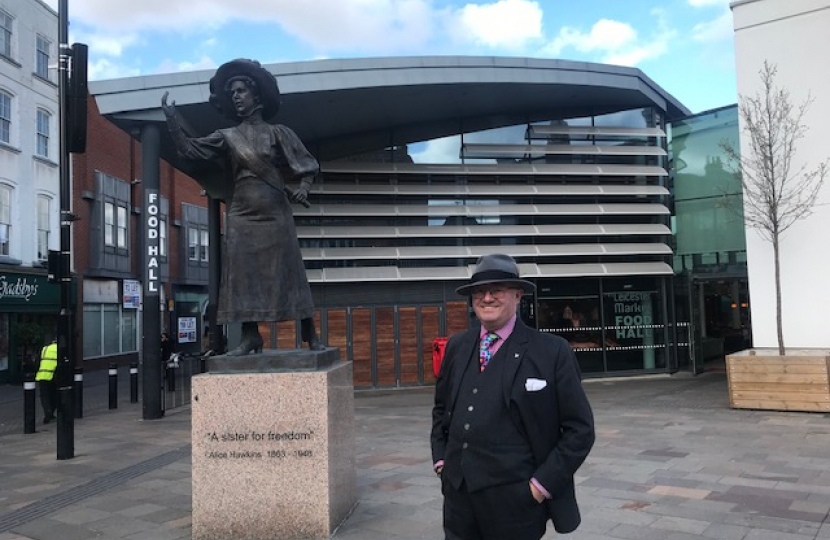 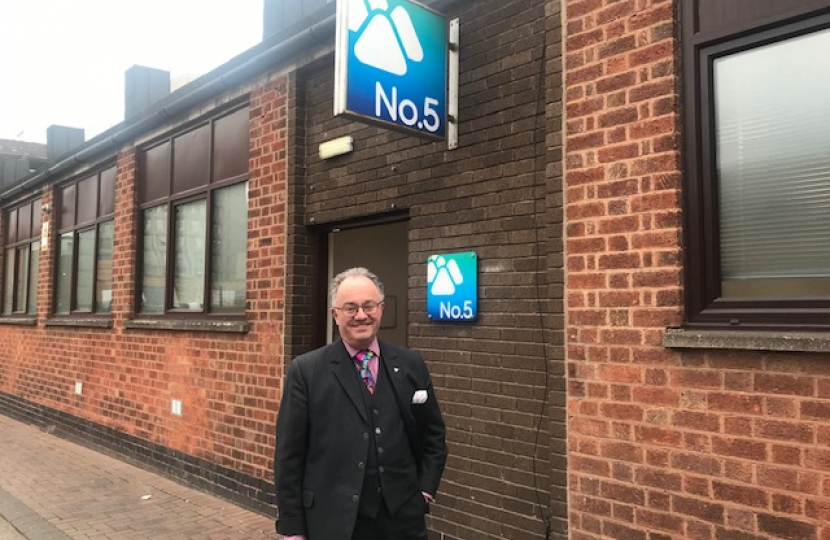 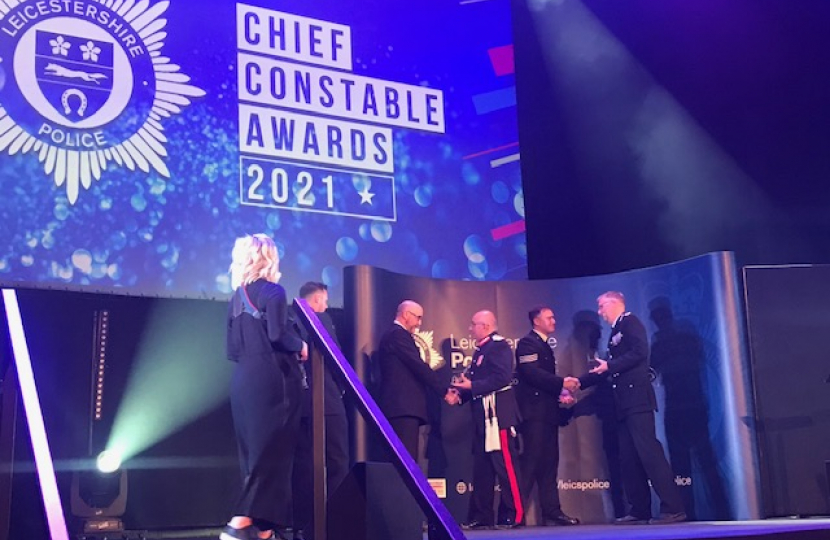 Today the Home Office are coming calling. Rather worryingly, the two officials coming up to Leicestershire have not said in advance what they wanted. Have I blotted my copybook? Am I about to be commended, or condemned. In the event, the two simply have a nice little chat. At least, it seemed so. But one of them did write an awful lot down in her notebook. I’m not paranoid at all. Really.

My next duty is much less worrying. I popped over to the Memorial Garden to help the Chief Constable plant a rose bush. It is one of the new “Duke of Edinburgh” variety. We are planting it both to commemorate the late Duke of Edinburgh and also to celebrate our Police Cadets who are doing the Duke of Edinburgh Awards. One of the cadets is present. She’s done the Gold – I am most impressed having not even got the Bronze myself.

I’m off to London for the day. My first meeting is with a parliamentary researcher who has – rumour tells me – a brain the size of a planet. His head turns out to be surprisingly normal in size, but he certainly doesn’t waste any time. He has not even sat down in the café where we are meeting before he launches into a monologue about an upcoming Police, Crime, Courts and Sentencing Bill in Parliament. All interesting stuff, much of it highly relevant to the OPCC and Leicestershire Police. But I wish he would slow down. These meetings are crucial if I am to influence the very legislation that impact upon the Police.

I then move on to meet Peter Bone MP, who wants to talk about the same thing. He serves up tea and cake, so he obviously knows me well. My next appointment is with Lord Wasserman. Peter’s assistant knows where his office is, but a security guard stops us. As a “stranger” I am not allowed to walk down the corridor linking the Commons and Lords. Despite the fact we can see the office we are heading for, we have to leave the building, walk around on the pavement, re-enter security by a different door, climb back up the staircases and walk down the corridors. “You’re late,” declares his lordship. On reflection this has been a really and productive set of meetings.

Wednesday starts, as ever, with our internal OPCC team meeting. These things are usually over quickly, but this time item after item keeps cropping up. We rattle through them all easily enough, but it is still late morning by the time we finish. And I have a headache. And a cough. Ugh!

After lunch I have a meeting with the Deputy Chief Constable. All interesting stuff, but by the time he finishes I’m feeling dreadful. Despite a negative test I cancel the rest of the day and go home. I head straight for bed, feeling terrible.

I have set my alarm for the usual time, wondering if I will be up and out the front door or if I will go back to bed and hide for the day. As it happens I wake up full of the joys of spring. Result!

First stop is the café at the Eyres Monsell Club for Young People. I indulge in one of their wonderful bacon cobs – thoroughly recommended if you are ever in the district. Then I am ushered out to the rear of the club. Last time I was here it was a patch of grass. Now it is a building site. They are putting up a new gym, complete with changing rooms and associated facilities. The OPCC funds some of the work that the club does with the teenagers off The Monsell, so it is good to see where some of the money is going.

I then head for Welford Road Cemetery to visit the grave of a Leicester lad killed in the First Wiorld War serving with the Leicestershire Regiment. It is 107 years to the day since the regiment launched a bayonet charge on the German trenches at Neuve Chapelle and so won a Battle Honour. I pay my respects.

The charity Leicestershire Cares is next. They do sterling work with ex-offenders and with teenagers in danger of getting into trouble. Kieran, their director, fills me in on their latest work helping troubled youngsters find a route into work. I promise to come back to look at their new VIP project.

Heading into the city centre I find rather more police about than usual. Of course, there is a football match. Actually I am here to find a van at the clock tower manned by PCSO 6628 Bec Sanders and volunteer Mezmin Malida. I’m expecting to have a chat, but the van is surrounded by crowds of shoppers. Eventually PCSO Sanders prises herself free and comes over to explain about her scheme for handing out personal protection packs to women and girls to help keep them safe in the city centre, especially at night. What a brilliant initiative.

Then it is on to No.5 – a charity that helps those with substance abuse issues. I am given a tour of the facilities.

But the clock ticks on, and it is time to dash back to the office in order to get changed for the Chief Constable’s Awards ceremony at the Athena. I find the entire evening a most humbling experience. I spend the evening listening to the most amazing examples of selfless devotion to duty by Leicestershire Police officers and staff. It is inspiring stuff.

The Chief Constable is just wrapping up the evening when the lights go down and he is dramatically caught by a bright spotlight. This is Simon Cole’s last time presenting Chief Constable Awards, and he is not being allowed to leave quietly. The Deputy CC pops up to pay a tribute to the magnificent leadership of our outgoing Chief Constable. The tributes are fulsome and well deserved – and followed by a spontaneous standing ovation.

The day kicks off with my fortnightly update meeting with Grace, the head of the Violence Reduction Network. All is going well, no doubt due to Grace’s hard work. I then head to the City Hall to speak to the public hearing of the Boundary Commission. There are various suggestions relating to the parliamentary boundaries. Some of these make sense, but those relating to Oadby and Wigston and to Rutland will cut across policing boundaries in what strike me as inappropriate fashion. I read out my statement. There are no questions, so I head back to the office.

In swift succession I have meetings with Anne, the county organiser of Neighbourhood Watch, Harriet from the National Farmers Union and Nik who heads a charitable trust with an interest in curbing violent crime. I then have a short break to write this blog before I have to go on Teams to speak to Cllr Helmsley and Cllr Stephenson from Rutland.

I am finishing the week as I began. Just like the officials from the Home Office, the two councillors have given me no advance notice of what they want to talk about. Urk!