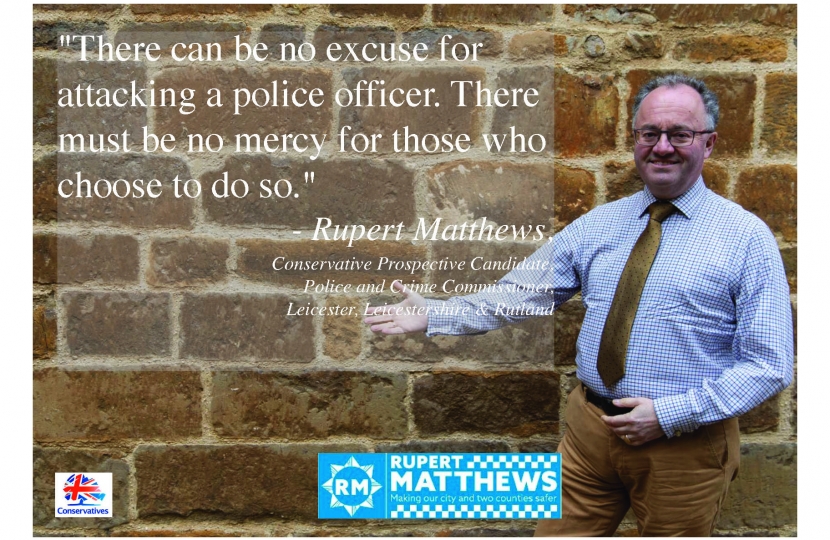 Our police go into action to protect us all. So it is essential that they are, in turn, protected. It was partly for this reason that when the modern police force was created by Sir Robert Peel in the 1820s it was decided that the new police officers would wear a royal uniform.

Wearing the Queen's Uniform gives our police the protection of being instantly recognisable. Being confronted by the Queen's Uniform should give even the rowdiest of troublemakers pause for thought before lashing out. If its does not, then it is incumbent on the justice system to ram the message home.

Nobody should be in any doubt that if they assault a police officer they are going to be in trouble. Serious trouble. I have long advocated that those who lay hands on the Queen's Uniform should face the severest penalties. Attacking a police officer is not just an assault on a human, but an assault on the entire system that keeps law-abiding people safe.

For that reason I was delighted to see a statement issued yesterday by the Crown Prosecution Service [CPS] under the heading "CPS prosecuting 50 assaults on emergency workers every day".

The statement - set out in full below - gives an update on prosecutions under the Assaults on Emergency Workers (Offences) Act 2018, which made attacks on the police and other emergency workers a specific offence. It was disappointing to find that in a 12 month period there had been 19,771 assaults on emergency workers - 90% of them on police. But it was heartening to learn that the CPS and the justice system are now viewing attacks on police officers as seriously as I do.

It is clear that many of the assaults took place when the attacker was drunk or high on drugs. Such a befuddled state does not make for clear thinking. That makes it even more important that all such assaults are prosecuted, that punishments handed down for such assaults are exemplary - and that they are publicised relentlessly. In that way even a drunk may pause before attacking the Queen's Uniform.

There can be no excuse for attacking a police officer. There must be no mercy for those who choose to do so.

The CPS statement in full:

The CPS has prosecuted more than 50 assaults a day in the first year of legislation making attacks on emergency workers a specific offence, new figures show.

Between November 2018 and 2019, almost 20,000 offences were charged under the Assaults on Emergency Workers (Offences) Act – three-quarters of which were assault by beating.

A review sample revealed nine in ten assaults were against police officers – almost always when the attacker was intoxicated on drink or drugs and being arrested for an unrelated offence.

Spitting was common but the violence perpetrated was wide-ranging and included kicking, punching, head-butting, slapping and biting.

The CPS data is based on the number of offences charged, rather than individual defendants.

Ministry of Justice figures for 2018, based on the first cases to go through the courts, show a conviction rate of 90 per cent.

Following a series of high-profile assaults last summer, the Director of Public Prosecutions met with police colleagues to discuss their concerns about rising levels of violence towards officers.

In response, the CPS has issued revised guidance to prosecutors clarifying our approach to these cases and we have also published a joint agreement with emergency services chiefs across the country.

Max Hill QC, Director of Public Prosecutions, said: “Emergency workers provide a vital public service – the fact they endure vile abuse like spitting and even physical assault in the course of their duties is appalling and unacceptable. These attacks must never be considered as ‘just part of the job’.

“These are serious crimes and it is encouraging to see our prosecutors have used the new legal powers to bring offenders to justice.

“Having been made aware of police concerns during the first year of this new legislation, I have met with senior officers and the CPS has updated legal guidance to strengthen our approach to these appalling offences."

Measures in the updated AEW guidance include:

•    Ensuring that prosecutors seek the maximum sentence in court, including playing any body-worn footage to the judge;
•    Impressing upon prosecutors the need to charge assaults on emergency workers where the Code Test is met, even where more serious offences have been committed, so the conduct  is reflected on the defendant’s criminal record;
•    Taking victims’ views into account when pleas to other offences are accepted or cases discontinued, with special consideration given to the vulnerability of the emergency worker, at the time of the assault;
•    Underlining the requirement to treat assaults committed on bail or licence as an aggravating feature.

Mr Hill added: “We want to send a strong message that this deplorable behaviour will be met with the full force of the law.”

•    Between November 2018 and 2019, 19,771 offences were prosecuted – of which 14,372 were assaults by beating, 5,362 common assault, 36 attempted assaults and one aiding/abetting an assault.
•    These figures are based on internal CPS data, which only records the number of offences charged rather than individual defendant outcomes.
•    The Ministry of Justice is responsible for keeping official criminal justice statistics