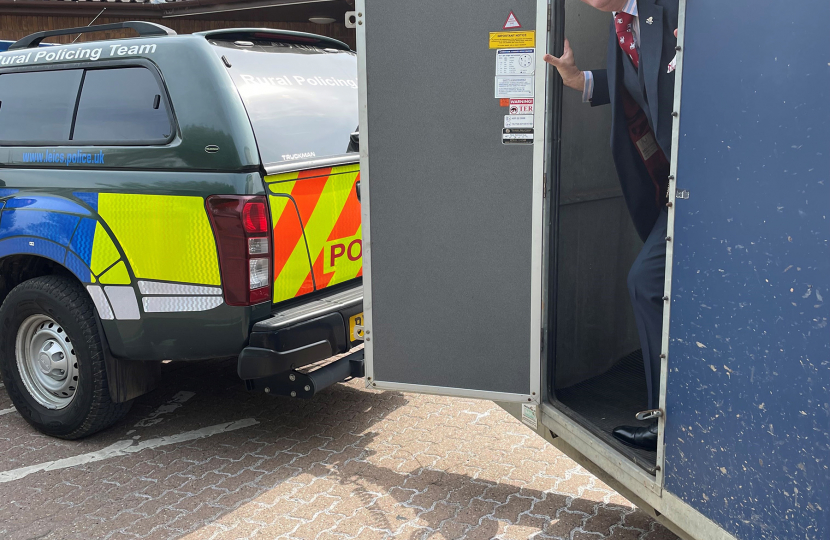 Leicester, Leicestershire and Rutland Police and Crime Commissioner Rupert Matthews has praised the efforts of rural crime officers after they recovered a stolen horse trailer used by veterinary students.

The trailer was taken in the early hours of Monday, April 11 from the Sutton Bonnington campus of The University of Nottingham and located by police in Leicestershire just a day later.

An officer from Leicestershire Police's Rural Team was undertaking a land search for a stolen telehandler around Packington in the Normanton Le Heath area. A dog walker pointed him in the direction of an old barn where he located an Ifor Williams HB510 Horse Trailer. Checks were undertaken while the trailer was recovered, and it was identified as stolen from The University of Nottingham's Sutton Bonnington campus. It was returned the following week.

The incident is the latest in a series of horse trailer thefts in both counties. A police investigation is underway.

Mr Matthews met rural crime officers this week as they prepared to transport the trailer back to the campus ready for students returning after the Easter break.

Mr Matthews said: "I am delighted our rural crime officers have been able to reunite this horse trailer with its rightful owners so quickly. Given the resource is used for the purposes of education, it is even more fortunate that it has been returned in good working condition, ready for a new term.

"Rural crime has a devastating impact on our communities and local livelihoods which is why I have prioritised the issue in my Police and Crime Plan. I am determined to make the lives of rural residents easier and safer by providing the necessary resources for rural police to do a good job. We have a dedicated rural crime team working hard to protect our rural communities from such losses and criminals should take note that anyone exploiting our countryside will be met with the full arm of the law."

Police are reminding trailer owners to keep a record of the details of their trailers including VIN numbers and photographs should the worst happen so they can be easily identified when recovered.