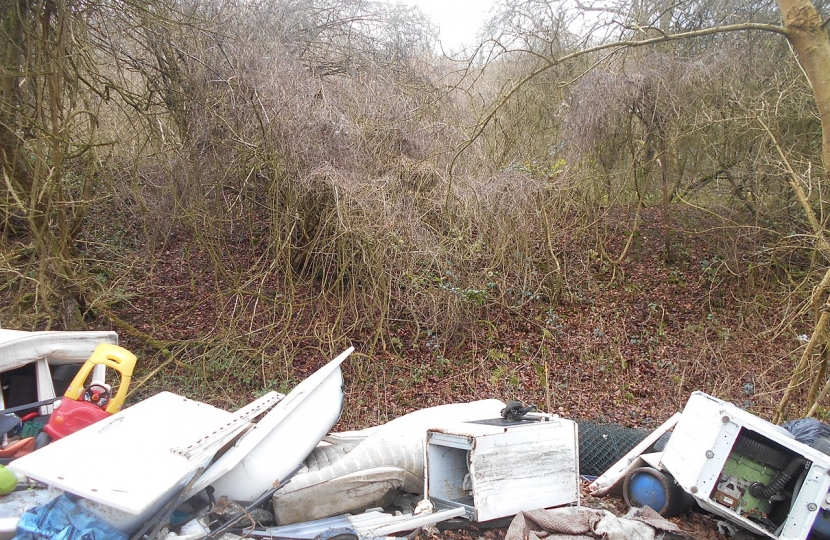 Every day an average of 32 piles of rubbish are fly-tipped in Leicestershire and Rutland. New figures from by the Department for Environment, Food and Rural Affairs (DEFRA) show there were 11,550 incidents of fly-tipping recorded across the area in 2019/2020.

Despite these shocking numbers, just 13 people were prosecuted for fly-tipping in that year. This is not good enough. Fly-tipping is a criminal offence punishable by a fine of up to £50,000 or up to a year in prison is convicted through our courts.

Those who fly-tip have no consideration for the impact of what they do. Quite aside from the obvious eyesore, organic waste can attract rats while chemicals can contaminate local streams and kill wildlife in large numbers.

Fly-tipping has an emotional impact on those living nearby. Across our two counties and city we are blessed with some of the most picturesque natural landscapes in the country but you do not have to drive very far into our countryside before you encounter piles of rubbish on the side of the road left carelessly by criminals. Those who live nearby are likely to feel disrespected and angry, and rightly so. Flytipping can beat down moral in rural communities

There has been limited protection and support for isolated rural and village communities under the Labour PCC administration for the last five years. A city-centric approach to policing has meant Leicestershire’s fly-tipping problem has been allowed to continue and escalate with little being done to hold criminals to account.

Voting into office a Conservative Police and Crime Commissioner on May 6th is the only way to ensure issues such as fly-tipping will get the attention they deserve across our two counties. Our police need to be given the resources and support to combat this crime more effectively.

Tracking down the culprits of fly-tipping is no mean feat. The best way to catch these criminals in the act is through utilising the fantastic community groups we have all around our two counties and city. I want to see the police working with groups such as Parish councils and Neighbourhood Watch schemes who know their local areas better than anyone.

Village Facebook groups and WhatsApp chats are hotbeds of information about the goings on in and around the area. Just recently we have seen these groups being pivotal in allowing the spreading the warnings about dog-thieves. I want to see our force proactively using social media as well as visiting parish council meetings and contributing to the discussions on local crime.

To deter fly-tipping further, we need more visible policing in our rural areas. Criminals feel as though they can fly-tip because by the time their pile of rubbish is found, they are long gone. More police patrols through our villages, towns and hamlets would send an important message to these criminals – we’re around and we’re watching you. This police visibility will also go a long way in building up more trusting relationships between the public and the police which, particularly in rural communities, has been ever slowly decreasing thanks to Labour’s misaligned priorities.

Lastly, the use of high-tech policing will be crucial in stamping out fly-tipping from our counties. The Northampton PCC Office recently launched a pilot scheme in which the office aims to buy mobile, quickly deployable CCTV cameras, which would be used by the local authorities in hot spot areas with the aim of securing the evidence to catch and prosecute the fly tippers. I fully support this initiative as I believe this is the way forward. Evidence leads to convictions and an increase in convictions will lead to a decrease in fly-tipping.

Solving fly-tipping will not come overnight. Only through comprehensive communication efforts between the police and the public can we stamp this vulgar crime out of our two countries. Fly-tipping has no place in Leicestershire, Leicester or Rutland.